Terrasson in one day

Terrasson-Lavilledieu, at the gateway to the Périgord noir and the Vézère Valley – listed as World Heritage with UNESCO –, offers you the opportunity to spend a day discovering the town’s treasures, free of charge. 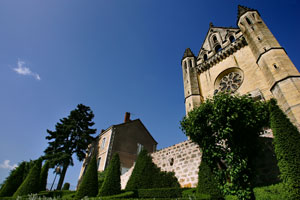 The building had an eventful history from the year 1000 to the end of the 19th century. The construction of a first abbey was undertaken by Sorus, a monk from the Auvergne area, in the year 560. In the 8th

and 9th centuries, when the Vikings penetrated the region from the Vézère river, the Benedictines decided to build this abbey church on the highest part of the hillside. The church is fortified with ramparts along the cliff. But the Hundred Years’ War and the wars of religion would mean that the building was destroyed several times over. Several restoration periods would follow. In the 16th century, the church would be renovated and a Flamboyant Gothic style entrance would be built (listed as a historic monument). The church would then be restored in the 18th century and significant work would be carried out in the 19th century by Abbot Pergot (the canon of Périgueux) and Abbot Cheval. The magnificent stained glass telling the story of Saint Sour was created during this period, and the rectory was added. The Saint Sour church is currently being renovated, and archaeological digs are being carried out by HADES (the private archaeological investigation bureau of Bordeaux). This work has uncovered tombs with ‘built frames’ (sarcophagi formed by joined flat stones) as well as a monolithic limestone sarcophagus and ancient walls (which probably belonged to the 10th century Romanesque church). 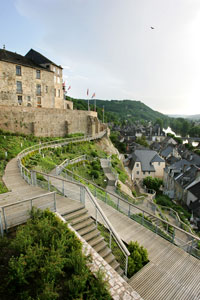 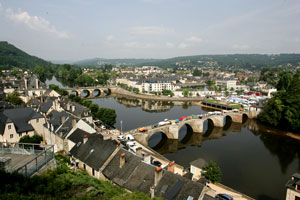 This is the first bridge built in hard materials to have been built across the Vézère. It was built in the 12th century by Bendictine monks, like the Old Mill and the dyke. To do so, a canal called ‘Brasset’ was dug, to lower the water level and divert its flow. Pont Vieux features Romanesque arches and other ogival arches which give it an original humpback shape and mark its various phases of restoration.
It has 6 arches in all along its 140m (341ft) of span. Its characteristic ‘beak’ jutting out over the water breaks the river’s current and was used to make way for carts to cross. On this bridge every Thursday morning, locals meet for a very colourful market: one of the most famous in all the Périgord. 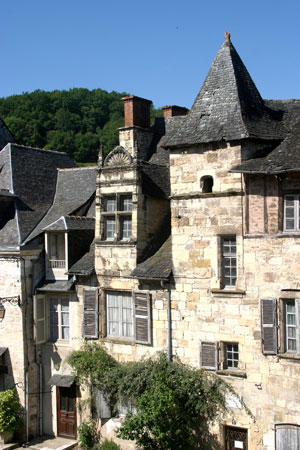 In the heart of a historic heritage that has been undergoing a vast rehabilitation and protection programme since 2004. This square can also be called ‘Place de la Halle’, as a covered market was built here under Napoléon III. It was destroyed after WWII.
On 13 May 1990, this square was named after Gabriel Bouquier and inaugurated by Pierre Delmon, the current mayor of Terrasson.
Here you can see the beautiful Renaissance house which was one of the residences of G. Bouquier (listed in the register of historic places on 22 August 1949). The Maison du Conventionnel Bouquier overlooks this square located across from the Saint Sour church. 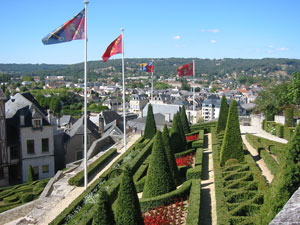 Facing the Jardins de l’Imaginaire, in the heart of the historic district, these magnificent gardens are inspired by past centuries, from the Baroque period to the 18th century. 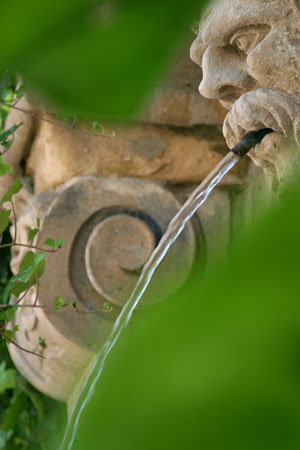 The fountain called Saint-Sour, located at the base of the church of the same name, is one of 10 fountains that are part of Terrasson’s water-flow circuit.
In addition to the fountain theme circuit indicated in the town map guide, you may also discover springs, drinking troughs, wash-houses and of course the Vézère river.

This fountain is special because it is free-standing; you may examine it from every angle. It is supported by the embankment that leads to Les Jardins de l’Imaginaire.
Its sculptures were inspired by the works of Jean-Baptiste Carpeaux, a famous 19th-century sculptor (Opéra Garnier in Paris). Two fauns and a nymph support the fountain’s stone basin. The attitude and dynamism of these three characters is intriguing.
Another original feature is the pediment in the shape of a gendarme’s hat.
During the summer season, the various fountains bring their coolness to the atmosphere and pleasantly punctuate the tour of the town.

Discover the other fountains, including a cast iron one in the Italian Renaissance style on the church square; and the largest one of the town, that of the garden of Vergne Island. 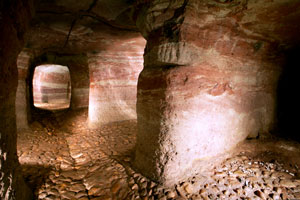 (By reservation as part of the tour of the historic district.
For more information)
An authentic Terrasson curiosity: these underground shelters are shrouded in mystery. Most of them include at least one source of water, leading us to believe that they could have served as refuge during hard times.
The town of Terrasson possesses a rich heritage marked by every period, as well as an unusual, mysterious side, with these 12 cluzeaux.

Geology: inferior layer of red sandstone dating from the Palaeozoic. Very crumbly sandstone called ‘araigné’, derived from ‘arena’, the Latin word for ‘sand’. The dug-out collects the run-off from the hillside: water that is constantly dripping through the rock.
It is composed of a central tunnel and a succession of alcoves on both sides. Here in Terrasson, the dug-out can be described as having a fishbone shape: where the fish head would be, there is a body of crystal clear water; the rock is carved out in the shape of a vertebral column and fins on both sides.
The floor of the grotto is cobbled with river pebbles from the Vézère, and a slope directs the water into a central channel.

There are no real traces of the tools used, no sculptures or exact dating; but it is considered that these grottoes were dug out in the High Middle Ages at the time that the Saint Julien Abbey was built. This is also part of the mystery.

The dug-outs might have been used as warehouses for merchandise (trade was intense here from medieval times to the beginning of the 20th century) but they seem too humid to have held anything but wine, with their water reservoir and the constant dripping along the walls. It seems that they were used as a shelter to protect inhabitants from attackers, from the Viking invasions through to WWII. 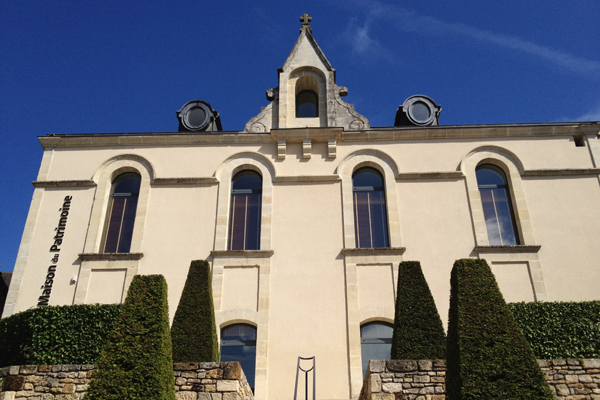 This trip through the town is a journey through time. Historic explanations and antique objects relate the history of Terrasson from prehistory to the present day.
Cents Ans d’Ecole à Terrasson (A hundred years of school in Terrasson)

200 class photos from 1890 to the 1990s and some nostalgic objects are an invitation to reminisce on your childhood or that of your parents.
Les Epis de Faitage (Finials)

Finials are also in the spotlight, with an exhibition devoted to these little gems: finials on exhibition in the gardens or perched on rooftops. Don’t forget to look up when you are strolling through the historic district!

From the Vézère and its tributaries to the hamlets and villages nestled on the neighbouring hillsides, walk in the footsteps of our ancestors to better understand modern man.  Traces of prehistory – both discreet and obvious – are present at every step.
The natural world offers varied landscapes, open spaces and sometimes steep climbs. Bolete mushrooms hide along the leafy slopes of these woodlands, while truffles abound underfoot in the limestone stretches and grottoes peek out along the cliffs; you’ll pass through farmers’ fields and holly oak woods dotted with wild orchids. Don’t miss the vast views over the Vézère and even glimpses of the Auvergne mountains! Geologically speaking, there are many clues to facilitate your interpretation: an alluvial plain along the Vézère river, limestone plateaus on the Causse… A variety of landscapes, colours and atmospheres. The hipped roofs of houses in slate or thackstone are proof of this variety. Well-known churches and small chapels, as well as wash-houses, bread ovens, and crossroad crosses make up a rich, characteristic rural heritage.
On your way through, you will encounter inhabitants of the Périgord who will share with you secrets of their expertise, from walnut cultivation to duck rearing and truffle farming.